This past Friday the 11th, golfers came together to participate in The Arc North Florida’s 2nd Annual Benefit Golf Tournament at The Country Club at Lake City. The tournament was presented by Poole Realty and the players that turned out helped to raise funds for The Arc North Florida while gaining a greater awareness of the needs of people with developmental and intellectual disabilities in the North Florida area.

Title Sponsor Ronnie Poole told the crowd “We’re happy to lend our support to The Arc North Florida and appreciate the great service the organization offers to people from the community”. This year Title Sponsor, Poole Realty was joined by The Arc’s Annual Sponsors, Rountree Moore Auto Group, First Federal Savings Bank and Wal-Mart Distribution along with 65 other area businesses that helped raise over $8,000 for The Arc.

This year’s prizes went to the top first, second and third place Gross and Net teams plus the top eight players received Tournament Player Packets to the Nationwide Winn Dixie-Jacksonville Open which had been donated. Longest Drive, Closest to the Hole and Closest to the Line winners each received $100 bank cards from First Federal Bank of Florida, and one lucky winner rode home with a new recliner from the Gibson McDonald store in Macclenny. Regretfully, no one made the hole-in-one needed to win the new Silverado truck offered by Wes Haney Chevrolet but there were enough near misses to raise a lot of heart beats.

Executive Director, Bobbie Lake, stated “Our sponsors and the players are the real heroes today and we know they had a great time because they’re already asking me when we’re doing our next event. 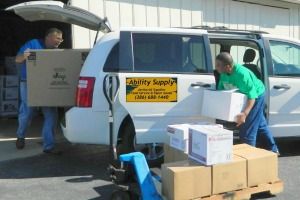